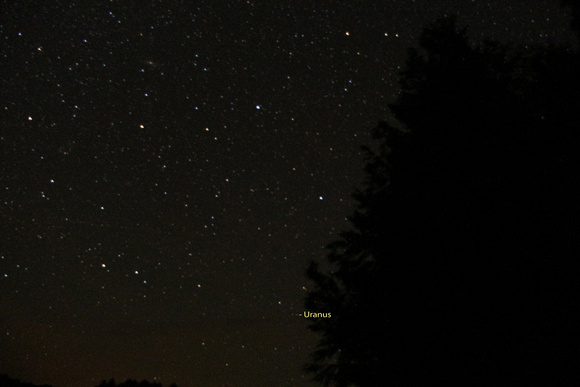 10 - Uranus
Ross Lake, Haliburton
Although I could pick out Uranus with my telescope, with difficulty, I was uncertain as to whether or not it would show up on a picture. I used the settings that I had used for other star pictures and then shot in the direction that I knew Uranus would be. Once downloaded onto my computer, I scanned the image and compared it to Stellarium images of the same area. It took a while to orient myself and the big bonus was to realize that the Andromeda galaxy was also in the image, albeit tiny. I inexpertly labeled the tiny planet.
Details:
1:18 am, July. 24, 2014
Canon EOS REBEL T5i
f/4 30 sec ISO – 3200 focal length 17mm
Category:
Subcategory:
Subcategory Detail:
Keywords:
© RASC Astroimaging