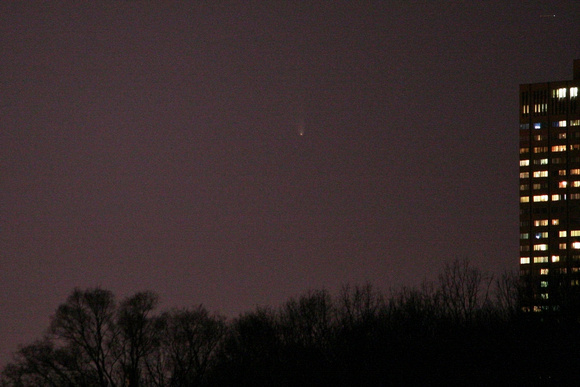 09 - Comet PanSTARRS2
Toronto
There was a lot of excitement about seeing PanSTARRS2 and I decided that I also wanted to capture a picture. My first try was with other RASC-TO members up in Thornhill, but when I turned my camera on I found my battery was dead. Not to be deterred, the next night I set my tripod and camera up on Woodbine bridge which gave me a clear westerly view. I could easily see the comet in my binoculars, although it was faint, but visible, to the naked eye. I was surprised that I could capture such a faint object in light polluted Toronto, particularly since there were light standards illuminating the road on the bridge.
Details:
8:50 pm, March 17, 2013
Canon EOS Digital Rebel XT
f/5.6 1 sec ISO – 1600 focal length 232 mm
Category:
Subcategory:
Subcategory Detail:
Keywords:
© RASC Astroimaging