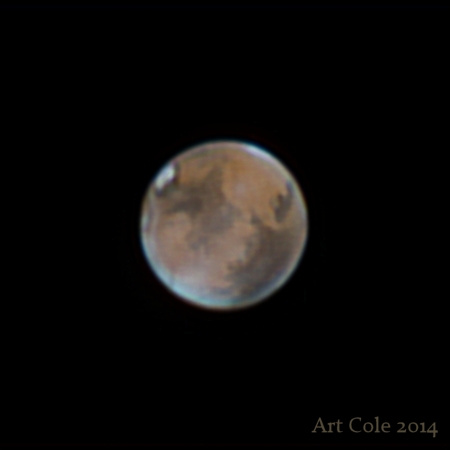 This is the first night of clear skies and good seeing we've had here in Halifax in a couple of months... planetary photography was off the table. I was getting a bit concerned that the whole Mars opposition cycle would occur and I wouldn't get a single image.
So I was pleased to set up my scope, and after a bit of collimation and focusing, to find that the seeing was superb. I could see numerous Mars features on the LCD while I was collecting video, including surface features, the polar ice cap, and clouds. So I knew that I had a good data set on my hands, even before I got indoors.
The resulting image shows far more detail than I've ever captured previously on a Mars image - I was very pleased with the results. Acidalium is easily visible, as is Meridiani, the northern ice cap, clouds and/or fog at the morning and evening sides of Mars, as well as a light cloud band that stretches all the way across the planet.
Video taken with a T3i DSLR on an 8"SCT/AVX mount combo. Frame selection performed in PIPP, and frame stacking and post-processing was performed in Images Plus. Post-processing included statistical sharpening, edge sharpening, saturation boost, noise reduction, and stretching, mostly done using masks.
Category:
Subcategory:
Subcategory Detail:
Keywords:
© Art Cole