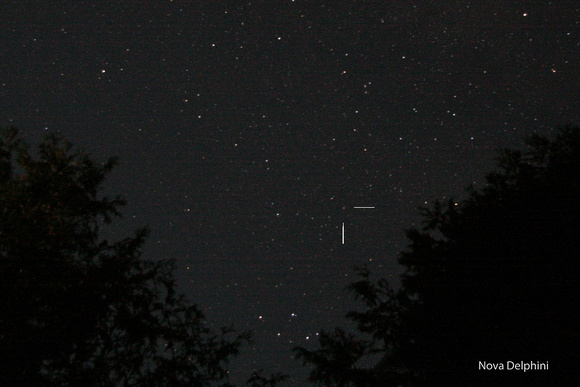 Nova Delphini Aug 23, 2013 by Kersti Meem
16 - Nova Delphini
Ross Lake – Haliburton
A nova is a previously undetectable star that brightens suddenly and then decreases in intensity over weeks or months. The cause of the brightening is due to the interaction between two stars. I was very excited to see Nova Delphini once I was able to locate it. In retrospect, I realized that I should have taken an image as soon as the nova was undetectable to show the before and after. I only managed to take that image some years later to show that the “star” really did appear and disappear from view.
Details:
10:49 pm, Aug. 23, 2013
Canon EOS REBEL XT
f/4.5, 18 sec., ISO – 1600, focal length 28mma
Category:
Subcategory:
Subcategory Detail:
Keywords:
© RASC Astroimaging