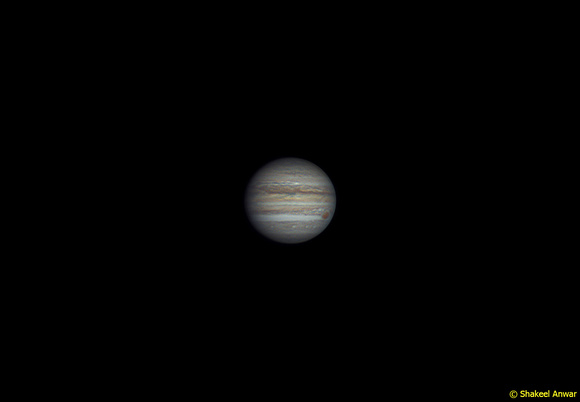 On Aug 18th, 2020 a new storm erupted just north of the North Equitorial Belt (NEB) on Jupiter. By September the storm had elongated and was causing turbulence in the NEB. This picture shows the white-coloured elongated storm racing (at an estimated speed of 560km) above the NEB. In addition to the storm, the Great Red Spot can be seen setting on the lower right along with a variety of cloud details across the globe.
This image of Jupiter was captured on September 21, 2021 and consists of 6 images stacked from 90 second videos. The images were taken with an 8inch SCT, 2.5X Televue Powermate, ZWO ADC and ZWO ASI224mc camera. Each video was stacked in AutoStakkert!3, with the final pictures processed in Registax and Photoshop. The final image was de-rotated and combined in Winjupos.
Category:Scenic
Subcategory:Night Sky
Subcategory Detail:
Keywords:
© RASC Astroimaging