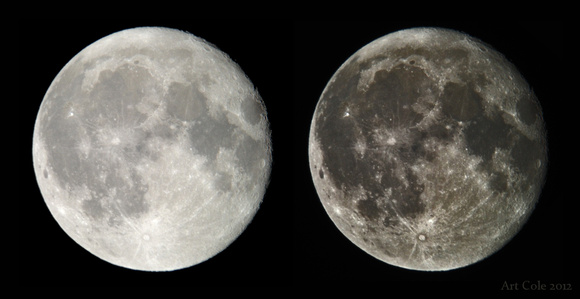 Ah, the wonders of digital processing... here is a before-and-after shot of the Moon, showing the original image I took on the left and the same image on the right, after some serious digital processing. Ordinarily I wouldn't do this much processing on an image, but the full Moon practically begs for it, as it brings out a lot of additional lower-contrast information such as maria and rays, and makes a beautiful image. When I think back to the days of film astrophotography it reminds me of how much easier things have gotten and how fortunate we are these days with CCDs and digital technology... goodbye, wasted rolls of film!
The original image on the left was captured with the Camera+ app, which I highly recommend for lunar photography. It has a nice feature where the exposure and focus can be set to different areas of the Moon. The focus can be set on features that have well-defined visual edges like the moon's limb or some craters, while the exposure can be set to a bright area of the Moon so that the image has a proper exposure setting. Nice feature, Camera+ people...
In Photoshop I reduced, flipped, and rotated the image, and then I lowered the brightness and played with the contrast for the dark, bright, and mid-range mid levels. Lastly I used the "Sharpen" feature to bring out details in the craters & rays.
Taken from Hammonds Plains, NS, with an iPhone 4s through my 8" SCT on a Nexstar mount.
Category:
Subcategory:
Subcategory Detail:
Keywords:
© Art Cole