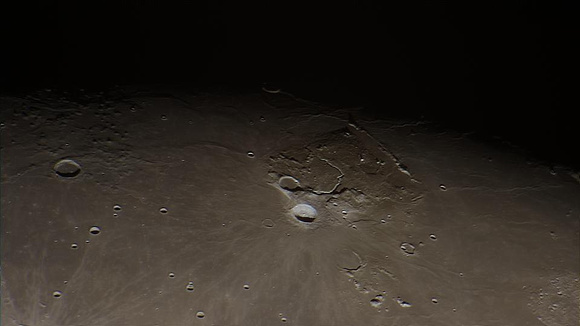 Aristarchus is hard to miss through a telescope when the Moon is full... it's so bright compared to the rest of the Moon that it looks like something is going on up there. In fact, it's just the way that it is angled, causing it to reflect a proportionately high amount of sunlight. Next to Ari. is the crater Herodotus (the one filled in by lava), and the long, snakelike valley known as Schroter's Valley. The large crater off to the left is Marius, and at bottom left the rays from Kepler are sneaking into the picture.
This image was created by capturing a video with my Canon 7DmkII on my C8, which I ran through PIPP, then Registax, then Images Plus. Taken from Hammonds Plains, NS.
Category:
Subcategory:
Subcategory Detail:
Keywords:
© Art Cole