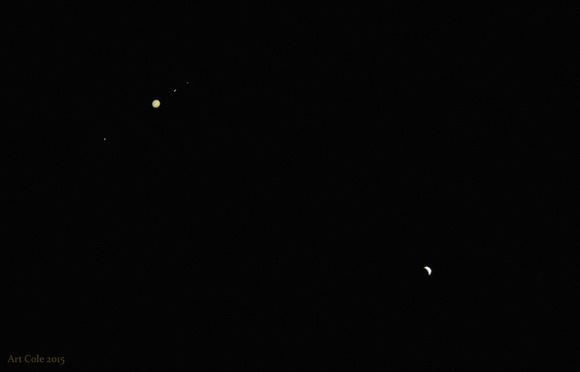 I didn't expect this to work out, given the low elevation of the pair and their differences in brightness. Through the eyepieces these guys were dancing all over the place. So I took multiple shots with three different exposures: One exposure for the moons, one for Jupiter, and one for Venus (which is intensely bright). Then using the magic of digital processing I stitched the best three together. I was surprised to discover through a single, low-elevation snapshot that the Great Red Spot was visible.
Although these planets look like they're at the same distance, Jupiter is much further away. In fact a couple of Venuses would fit inside Jupiter's Great Red Spot with room to spare. In addition, Venus is getting closer to us every night, while Jupiter is moving further away. From left to right, Jupiter's moons are Ganymede, Io, Europa, and Callisto.
Captured using a Canon 7DII on an SCT/Advanced VX combo. Single shots at different exposures combined. Used Images Plus for processing. From Hammonds Plains, NS.
Category:
Subcategory:
Subcategory Detail:
Keywords:
© Art Cole