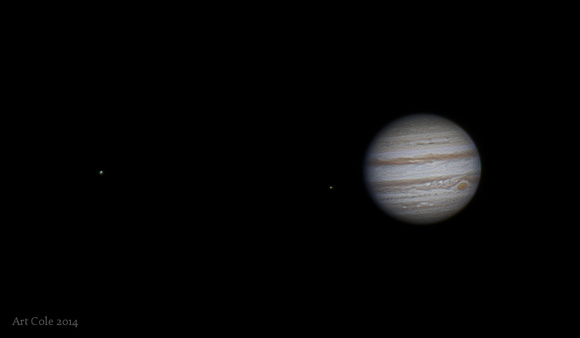 My first night out with my 3X Barlow was a bit worse than I anticipated, with 5/10 seeing and really bad transparency. And with a bad storm on the way for tomorrow night there was basically no choice as to whether or not to go outside to get some Jupiter video, even though it was -16 C. I would put tonight's seeing at around 7-8 out of ten.
So here's the result of tonight's video. I'm pretty happy with the result. I tried to time it so that Io was coming in towards Jupiter on the left while the GRS was close to the right side of Jupiter. The leeward side of the Great Red Spot is much more interesting, with the various, vortices, swirls, and storms that lag behind it. I also managed to capture the distinctive colour of Io, and I'm going to go ahead and say that I captured a surface feature on Ganymede - it's just barely detectable here, but much easier to see on the full-size image.
This video was first run through PIPP for conversion, cropping, centering, and quality assessment (I kept the best 25%). Next I processed it in Images Plus - this included stacking, histogram adjustment, sharpening, saturation boost, and binning. Lastly it was into PSP for canvas enlargement.
Equipment used included a 7DII DSLR, 8" SCT, Nexstar mount, and a 3X Barlow.
Category:
Subcategory:
Subcategory Detail:
Keywords:
© Art Cole